Hit enter to search or ESC to close

Cheers erupted around the room at the Fair Dinkum Sheds (FDS) Gala Dinner held on Wednesday night, September 11, as winners of the inaugural FDS, Shed of The Year Awards were announced in Adelaide.

Amanda Armistead – Business Manager FDS and SOL, said the winners of each category were announced as part of an event full of glitz and comradery.

“These Awards are a fantastic initiative for our company to showcase excellence across Australia in this sector,” she said.

“We’re thrilled at the excitement and support, and if the night set the benchmark, I can only imagine what the entries will be at the next Awards.”

Shed of the Year category winners were announced, as well as other Award winners such as the top sellers for each state and territory across Australia.

Congratulations to all of the award winners, including (but not limited to) 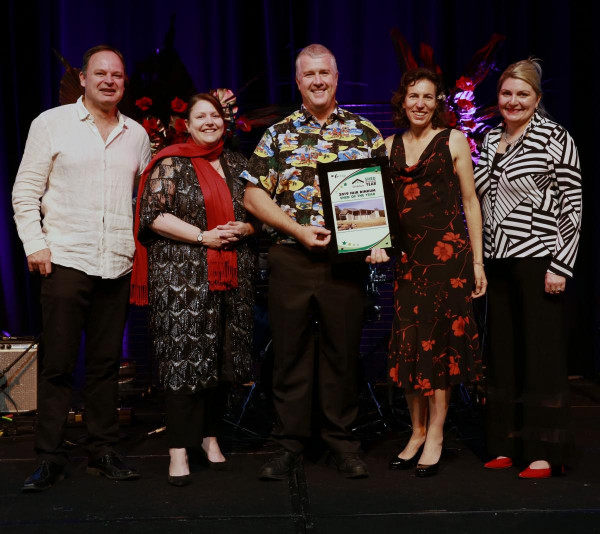 FDS team members, Charles Krivaci, Janine Scott and Amanda Armistead (left and far right) with our first Shed of the Year Award winners Brian and Angela Kelleher from Stable Sheds and Garages (centre and centre right) at the Gala Dinner in Adelaide.

Amanda said that the FDS team wanted to thank those who entered and said the standard of excellence reinforced why FDS is such a prominent name in a competitive market.

“We heard that our distributors wanted to celebrate our success and so we worked together to create the Shed of the Year Awards.

“By celebrating who we are and who we want to be in the future at the Awards Night, sets us up nicely as we transition into a new chapter for FDS.

“It’s clear there is an exciting future ahead for FDS, and we’re so proud to have such innovation, creativity and incredible standards, which have set the bar for others to follow,” she said.

The next FDS Shed of the Year Awards will be held again at the FDS Conference and Gala Dinner in 2021.

Flat roof carports are simple, yet functional. If you're after affordability and ease of installation, this carport is the way to go.

Flat roof designs are brilliant for any outdoor area or patio, and what's more – they're very cost-effective.

Design your own shed

Use our Shed Designer app and see what looks good.

Contact your local Fair Dinkum Builds expert today. They’re ready when you are.